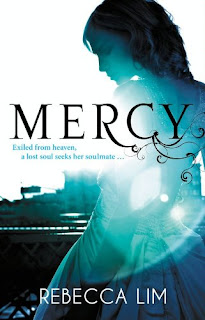 Mercy is a unique story, one in which the main character does not know herself any better than the reader does. She does not know whence she came, or who she is. She only knows that her name is Mercy, and that she currently possesses the body of an average teenager called Carmen with a singing voice like an angel’s. She also knows that another girl her age has been kidnapped, and as she helps the girl’s brother, Ryan, uncover the secrets behind the kidnapping in an effort to rescue the girl from a death that may have already happened, she is beginning to fall for Ryan.
I have mixed feelings about Mercy. I enjoyed most of the plot—figuring out the clues about the kidnapping, unexpected twists, etc.—but there were entirely unprecedented things that happened that remained unaccounted-for throughout the book. Maybe this was supposed to lend a sort of mystery to Mercy’s past, but it set me on edge. There were times when I had no idea what people was talking about, which was unfortunate—because aside from this it really was an interesting book. Apparently there will be a sequel to Mercy. I’m not sure whether I’ll read it yet. If it means that the loose threads left dangling from the first book will be tied up, perhaps I will.
Diane, 13
Posted by Fresh Ink - Porter Square Books at 10:38 AM

Email ThisBlogThis!Share to TwitterShare to FacebookShare to Pinterest
Labels: 0511, Diane, Hyperion, YA