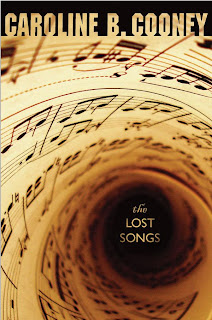 The Lost Songs is about some teens in a Southern town. The songs of the title are spirituals that have been passed down through the family of Lutie, one of these teens. A big question throughout the novel is whether Lutie will agree to sing these songs and give them away to the world or keep them secret as the heritage of her family.
Other characters include a new girl having trouble making friends, a tough kid who is planning something big to make himself notorious, and a popular kid who "is a friend to all and makes an effort at nothing".  Major themes are the importance of faith, music, and family.
Unfortunately, the book is a little too preachy to make an impact, the characters almost fully rounded and real but ultimately only figures in fables designed to teach a lesson.  The concept behind the book is interesting, and maybe it would have been good if it had been twice as long and spent more time making the characters real.
Elliot, 15

Posted by Fresh Ink - Porter Square Books at 9:45 AM

Email ThisBlogThis!Share to TwitterShare to FacebookShare to Pinterest
Labels: 1011, Elliot, Random House, YA