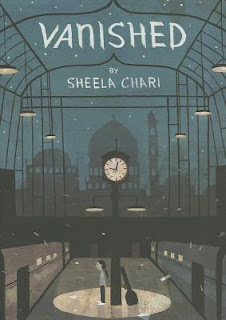 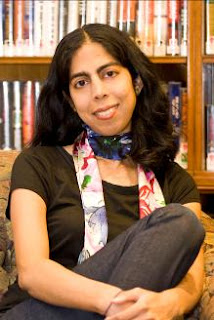 When we last saw Sheela Chari, she was here for our one-year Fresh Ink anniversary party. Now she's back to answer a few questions from our very own reviewer, Simon.
But first, a little bit about Sheela (information taken from her website). Sheela Chari was born in Bangalore, India and has lived in Iowa, Washington State, California, Massachusetts, and New York. She has degrees from Stanford University, Boston University, and New York University, where she received an MFA in creative writing.Sheela lives in New York with her husband and two daughters. Vanished is her first novel.Now, on with the interview.
Simon: Do you have special clothes you like to wear while you write?
Sheela: I'm not too particular - sometimes I write in my pajamas, sometimes I write when I'm dressed for the day. I've noticed that in the winter, a pair of warm socks helps!Q: What books did you grow up reading?A: My favorites were the Beverly Cleary books when I was younger - Ribsy, Henry and Beezus, Ramona the Pest, etc, and then the Madeline L'Engle books A Wrinkle in Time when I was a little older. I also loved books that were set in real places like A Tree Grows in Brooklyn, and Heidi, and even Island of the Blue Dolphins (whose main character was based on a real-life person buried in the Santa Barbara mission).Q: How much do you write every day?A: Ideally I try to write every day, and I set myself a goal of either 500 words if it's a short session, or 1000, if I have more time.Q: Did you want to be a writer when you were growing up?
A: Yes. I distinctly remember at the age of nine, telling my mother I wanted to be a writer when I grew up. At the time, her response was, Oh, no! But I think it was because she didn't really know what it meant to be a writer back then. She does now - and she's really proud of what I do. I did want to be many other things as I grew older, but I always came back to writing.Q: Of all the places you’ve lived what made you decide to set your story in Massachusetts?A: Originally the story was written for my niece, and she lives in Massachusetts. Later though, I'm glad I chose the Boston area, because writing about that setting came very naturally to me. I used to live there for a few years, and I love the place, its people, and the strange quirks that make it what it is.Q: Who is your favorite mystery author?A: I'm not sure I have a favorite mystery author - but I recently read The London Eye Mystery by Siobhan Dowd, which I thought was amazing!Q: How come you wrote Vanished in third person?A: Very interesting question. Strangely I found I could reveal more about what was going on if I was not immediately in Neela's head. I could plant clues that were there but not something necessarily she would pick up (but an attentive reader might). Also, the third person lets me get inside Neela's head when I want to talk about her feelings, but it also gives me room to "move around" in a way you can't easily do in first person. As it turns out, though, my second book is written in the first person.Q: What did your niece think of the book?A: She said she loved it (and I hoped she did!). She is older now - almost sixteen, so she is very different from the person she was when I first began writing Vanished.Q: Where do the character names come from?A: I'm terrible at naming characters. Most of the time I don't like doing it, so I usually pick the first name that comes to my mind, so that it's my intuition that's doing the selecting, not me. With Neela, Sree, and Pavi, they were based on the names of real characters, so I got off easy there!Q: What are you planning on writing next? A: I'm working on another novel set in the Boston area. This one is about a twelve-year old boy with an unusual talent. Not a mystery! And that's all I'll say for now!


Thanks Sheela and Simon for dropping by the blog. Can't wait to read what's next.

Posted by carterbham at 3:52 AM