The Amazing Adventures of John Smith, Jr. AKA Houdini 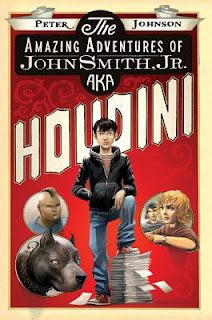 The Amazing Adventures of John Smith, Jr. AKA Houdini is about a boy with a rather chaotic and very eventful life. He has five problems: 1) a creepy guy who lives in his neighborhood; 2) his even creepier dog; 3) a bully named Angel; 4) a selfish Mayor; and 5) (this one's a biggie) his brother who's off fighting in a war.

Amazingly, with a little luck and some help from his friends Houdini is able to fix his problems in ways you will never imagine. The problems usually seem to play a part in the solution of other problems until everything is fixed. It all turns out fine in the end. This was an amazing story. I began to read and then I sat down for an hour or two and completely finished the book. It's that good!