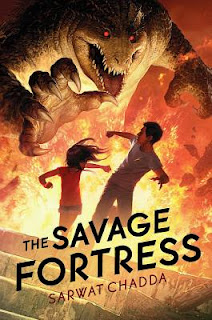 I loved The Savage Fortress! I found it similar to the Kane Chronicles by Rick Riordan.

At the beginning of The Savage Fortress, Ash and his sister Lucky go on vacation to India. Ash and Lucky end up in a world of demons. What started it all was when Ash accidentally stumbled and fell into Rama, an Indian Emperor's tomb. Ash saw a golden arrowhead (an Astra) and takes it from the tomb. It seems that Mr. Savage wants it, so now Mr. Savage and his demons are chasing Ash and his sister. That's where the adventure begins.

If you like adventure and mystery, then this is a book for you!