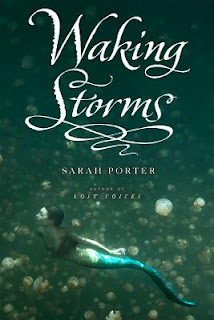 Waking Storms is an exciting and thrilling fantasy novel about mermaids living deep under the ocean. As the second book in the Lost Voices trilogy, it follows the story of Luce, a young mermaid who has left her mermaid tribe. She faces many perils and dangers living on her own, such as sharks and orcas, however her biggest threat is the boy she broke mermaid law to save. He is angry, and Luce is worried he will tell the humans about the mermaids. Meanwhile, the humans are showing fretful signs that they have suspicions about mermaids living in the ocean, which could be a danger to all mermaids, everywhere. I really enjoyed this book. It is an edge of your seat fiction story with a pinch of romance. Some parts can be dark and dangerous, and will have your palms sweating and heart thumping. I would recommend this book to girls who love romance and fantasy, age 12-16.

Email ThisBlogThis!Share to TwitterShare to FacebookShare to Pinterest
Labels: 0712, Harcourt, Natalia, YA